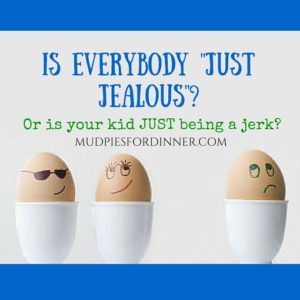 When my oldest daughter was in the fifth grade she came home with a long, sad face telling me all about how a girl at school had teased her.  I can’t remember the whole scenario because with three daughters, my days are filled with countless, “Mommy, let me tell you what happened” followed by lame endings.  Its like of lifetime of listening to jokes with no punch lines.  Every now and then, though, they may say something important, so I listen.  In the spirit of full disclosure I will tell you that I make gestures like I’m hanging myself, gagging on my finger, or falling asleep while they’re talking.  The fact that it doesn’t bother them amazes me.

Anyway, my daughter delivered a laundry list of stuff like “then she said…,” “and then she…”, and “it hurt my feelings when she…”  Then before I could ask my first question, she said the phrase that makes my skin crawl:  “She’s just jealous!”  Jealous of what?  Jealousy may have been a factor, but was there anything else? I had to ask.

I have a theory on the whole “just jealous” thing.  Its a tool that parents give their kids to deal with uncomfortable situations with their peers without having to consider the role they may have played in their own misery.  “Oh honey, they’re just jealous.”  Give me a break.  What if your kid was being a jerk and is just upset because the other kid got the best of him or her?

Stay with me here.

One of Eddie Murphy’s most famous skits is from his iconic movie, “Delirious.”  In the skit most people simply call, “Ice Cream,” Eddie talks how he got money from his mother to buy ice cream.  The first thing on his mind after he got the ice cream was teasing the neighborhood kids who didn’t get any.  He told the kids they didn’t have ice cream because they couldn’t afford it, their parents were on welfare, their dads were alcoholics, and proceeded to dance and flaunt his ice cream in their faces.  Eventually, of course, the ice cream fell on the ground and the tables quickly turn where the other children were now teasing him because his ice cream fell.  Of course, he cried.  He deserved it.  He was being a jerk.

Let’s say your kid is Eddie “leather pants in the summer time” Murphy.  Imagine that Eddie comes to you and tells you that the neighborhood kids laughed at him because he dropped his ice cream.  If you stop there, ask no questions and respond, “Oh honey, they are just jealous,” you completely miss the part where he was being a complete jerk to them before they said anything to him.  He doesn’t have to even admit his jerkiness so you are basically giving him permission to keep being jerky.  Then, the little jerk becomes the huge jerk that everyone hates to see coming.  We all know a few.

Moral of the story:  When your kid comes home with a story that places all of the fault on the other kid, ask more questions.  They could have really been mistreated or bullied.  OR they could be a jerk hiding behind a cute face.

Today, my goal as a mother is let my children know that they can sometimes be jerks and I’m not in denial about it.  That is all.