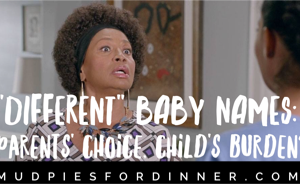 Last night’s episode of ABC’s Black-ish gave “mainstream” America a peak into a rarely seen or discussed conversation that takes place in Black households: The Name Game. Depending on how many generations are involved in this process, it can be simple or result in the expectant mother receiving a storm of phone calls and messages with… “Alisha! I KNOW you and Kevin ain’t gonna name that baby KEVILISHA!” But they will. Because it’s “cute.” Because Kevilisha was made out of love between Alisha and Kevin. They “went half” on that baby. They “went half” on that name. You don’t have a say. So hushyamouth. And they’re 100 percent correct.

BUT what Kevin and Alisha don’t realize is this:

1. Kevilisha won’t always be a baby.

She will be a woman for the majority of her life. Give her a mature name and a “cute” nickname.

2. People will make assumptions about her based on her name.

Hopefully, she will grow up and desire to be taken seriously. Professional black women have faced challenges because of their “different black” names. For the record, I don’t know if I like ‘ghetto’ as a description so I’m going to say “different.”  Why add another hurdle for your child to overcome? Before you roll your eyes, what comes to your mind when someone mentions Becky? You think you know her before you meet her. Same thing for Kevilisha.   I won’t put words in your mouth or head for Becky OR Kevilisha but…go with what you’re thinking. Yeah…that.

So here’s the thing: name your baby what you want. It’s your baby.  Eventually, though, they will become their own adult. Just give it a little thought first.  And no. It isn’t just a “black thing.”  Just ask Heyleigh Summer-Reignbow Smith the reaction from her counterparts when the roll was called the first time in her Quantum Physics class. You get the point?

What do YOU think?

I believe you should be able to name your babies whatever you want to!  I did!  But listen,  I have a big forehead and chances were good that they would, too.  Why expose them to getting picked on for having a big forehead AND a funny name with 80 letters and three apostrophes?  I’m just sayin’.