It is Black History Month.  Black. History. Month.  With all of the craziness that is coming out of Washington, this fact has been overshadowed. The only acknowledgements from our new administration have been about the great things that Frederick Douglass is doing nowadays and the misspelling of W.E.B. duBois’s name in a tweet from the Department of Education no less.  But listen, it isn’t the government’s responsibility to instill in our children the history that is ours.  The responsibility belongs to us, as a community.

We are accustomed to the half-hearted references to our history and obligatory “Malcolm…Martin…Rosa” mentions.  HOWEVER, when folk decide to get downright DIS-REEE-SPECK-FULL! No ma’ams. No sirs. We have to stand up for our children and show them what is right.

We are all familiar with the Norman Rockwell painting of Ruby Bridges.  We are familiar with her story.  Many of us have parents who grew up in the Segregated South and who have their own stories.  My own children have heard the stories from their grandmother.  The “black” school in my hometown is still standing.  A ghost town since segregation.  It isn’t funny.  It isn’t a joke.  It isn’t satire.  Integration was a painful time for an entire generation of black children and their families.

So I wake up this morning and I see this lame attempt at appropriating this iconic moment is African – American history to the current political climate.  My face is twitching.  Literally.  This man can’t be for real. 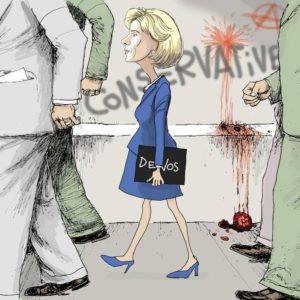 In addition to the laundry list of foolishment that I have to explain to my children about what is going on in this world, here is what I will tell them about the latest blasphemy that is cartoonist Glenn McCoy:

Ruby was LITERALLY a poor little Black girl who wanted to go to school and learn.  She wanted to get an equal education to her White counterparts.  She carried the weight of every Black child in the country on her shoulders.    Betsy is a Billionaire GROWN WOMAN.  Arguably, she bought her right to be in the position that she is in.  It is a political one.  People in political positions are often the targets of protests and free speech and they accept this fact willingly.      Note:  Betsy is carrying a monogrammed portfolio and Ruby is carrying a book and a ruler, okay? Betsy IS NOT A VICTIM.

Yeah.  He tried it.  And failed.  I won’t even waste my finger strength typing an explanation for this buffoonery.

3. Ruby needed US Marshalls to enter the school. Betsy did not.

Betsy went around the corner and enter the same school…on the same day.  Ruby had to have the intervention of the President of the United States over the protest of the governor of the state.  Betsy had, what?  Some angry mommas with some poster board and Sharpies standing in front of the school?  NOT the same thing.  Girl, bye.

4.  Imagine someone slapping an entire generation in the face because this guy just did with his lame cartoon.

Each of your grandmothers, if they lived through integration, ARE Ruby Bridges in their own right.  The appropriation of this imagery to parallel the plight of Betsy DeVos is a slap in the face for every time a child was a called a degrading name, spat on, their parents fired, their houses burned, they were beaten up, and on and on.  I could scream right now.  Not just the Black grandmothers and grandfathers either!!!  The non-Black brothers and sisters in the movement who stood beside them! “Buffoonery!!!!!!”

Listen.  Our children will see this wackness and won’t know how to process it.

It is up to us to help them.  What I will not allow to happen is for the history of African-American culture (or Jewish or native American or Mexican) to be watered down.  Not for my children anyway.  If you don’t know if they’ve seen it…SHOW THEM.  Nowadays, we don’t know what our children are taking in.

Even if you are a Conservative you should be bothered by this.  This was disgusting.  Let me go get me some fresh new Sharpies and posterboard.  Somebody send me his address!  I have a whole crowd of children, too!!!  CLEARLY he thinks Sharpies and poster board are just as scary to adults as mobs of angry adults yelling and screaming and spitting at a little girl. Totally the same thing, right?

What do YOU think?

I believe that people are just doing too much.  Cultures and histories should be respected.  How can you even draw a comparison?  Stretch Armstrong can’t even reach that far.