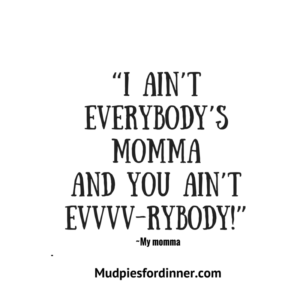 If you are anything like me, the words “Mommy can I…” make your skin crawl.  The older children get the more outrageous (and expensive) the requests.  At least when they were younger, I could promise them a pet dinosaur “tomorrow” and make them forget about it with a scoop of ice cream.

Now, as a general practice, I pretty much just say “no” before my older girls get the actual request out.   I just go ahead and set them up for disappointment before they get too excited.  They think I’m crazy (which is by design) so they always ignore the first “no” and finish asking for whatever they want at that moment. When the answer is still a “no”  I don’t say it again.  I just keep doing whatever I’m doing while they say, “Can I Mommy?  Mommy?  Mommy?”

The reality is that we absolutely hate to really  tell our children they can’t do something or have something they want.  That’s the hardest part about being a parent.  But make no mistake about it.  When my gut, common sense or experience guide me against it…I will shut it down.  Every now and then they will  try to plead their case to get us to reconsider.  Sometimes we do if the argument is good enough.   Other times, they will throw in what “everybody else’s parents”  allow them to do.  Um….wrong move.

The first time I heard that term from my children, I immediately responded, “I ain’t everybody’s momma and you ain’t evvvv-rybody!”  As soon as it came out of my mouth, I turned around really fast and looked around the room.  That wasn’t my momma, it was ME!  Those were the exact words my mother used with me and by the time that chick was done with me I never said it again.

When I was young, I wanted “everybody else’s parents” to be my  parents, too.  I get where my children are coming from.  I remember thinking my momma was evil when she would tell me no.  The emotional scars “that woman” left on my little spirit were deep. They were so deep that I promised myself I would never ever ever be so mean and heartless to my own children.  I mean, why was I the only one who couldn’t do certain stuff?

Okay.  Well…I’m “that woman” now and I’m a kinda proud.  I’m not completely  heartless, though.  Almost all of the time, I’m alright with discussing the question of “Why?” because it is sometimes necessary.  I don’t want my girls to mindlessly follow and I do want them to understand why we make certain decisions.   But I will, without hesitation, reach in my back pocket and slam that “because I said so” card on the table, throw my hands in the air, twirl and walk away.  It just depends on how I’m feeling that day and what the topic is.  They will definitely get the twirl if they come with that stuff about “everybody else” and their parents.

I ain’t everybody’s momma and you ain’t evvvv-rybody!”

Half of the time, I think that kids see things on television, social media, or simply from their friends that lead them to believe that they should be doing so much more than is appropriate for their age.  Yes, there are some parents who have children who “freestyle” (do whatever and go wherever), but there are tons of things that “everybody” is doing that I won’t knowingly allow my children to do.

All the boys want THAT GIRL to have fun and party with but no man wants THAT GIRL to be his wife.  Don’t be THAT GIRL.”

There’s my trump card.  We’re trying to raise wives…not girlfriends or “side pieces.”

Today, my goal as a mother is to break it down.  I’m not my kids’ friend; I’m their mother.  I’m the only person in that world with that title.  That said, I have to be willing to do for them what no one else will.