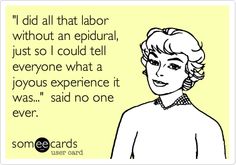 Every mother has been a part of those conversations. You know the ones. You’re sitting next to a mother with a big, juicy, chunky baby and you compliment her on how big, juicy, and chunky the baby is and then she proudly tells you that she delivered the baby naturally with no medication…and he was NINE POUNDS at birth.

The hell YOU say!   Then, she proceeds to tell her birthing story. Now, unless you have delivered a bigger baby or delivered your baby in the wilderness, she has just established her place as Chief Mother. You are nothing. So sit…and listen.

She will tell you how she never considered having an epidural. “It just isn’t natural. You can be paralyzed”, she says. “It increases your chances of being forced to have a C-section”, she says. “It’s just not good for the baby”, she says. Some mothers are instantly shamed and attempt to explain to the Chief Mother, “Oh…that was my plan, too. But I had to get an epidural because….” Not me…..oh no….I was always proud to say that I demanded my epidurals. I’ll never forget the nurse asking me if I wanted an epidural when I got settled into my room for induction with my first baby. My momma, as usual, interrupted with, “Oh no! I didn’t have any medication when I delivered her and she’ll not have any.” “Excuse you momma. Nurse, hook me up and wake me up when it’s time to push, okay?” No pain over here, buddy.

After a while, though, my defiant attitude got boring so I decided to have a little fun with it. After you have a baby you are constantly surrounded by other mothers and all they want to talk about besides breastfeeding is their birthing stories and it gets lame.

Whenever I would encounter a Chief Mother I would re-invent my birth story. Every time, my story got more wild: “I was at home with the family. Brothers. Sisters. Cousins. Everybody. We were burning incense and listening to the elder mothers re-tell their birth stories. My husband wrote a beautiful poem, a love poem, and he would only read it during my contractions to keep my attention off the pain. When it was time to push, the men gathered and prayed while the women and my doula, Erykah, coached me. “ I win. I. Am. Chief. Mother.

I mean, really? How would they know unless you tell them? Shoot, for all you know, they may be lying to you! Don’t feel badly and don’t feel obligated to apologize for your decision or your doctor’s decision. Listen, epidurals are where motherhood starts, okay? Epidurals are your last opportunity to lay down and chill for like, I don’t know……twenty-five years? Kids are leeches, they don’t leave in eighteen anymore. Don’t fool yourself. Go ahead and tack on an extra seven years of bad luck.

Moral of the story: If two women are wheeled out of the maternity ward to go home with their babies, whether they delivered without medication, had an epidural or had a C-section, they are both called “mommy”. Do what works for you. You don’t have anything to prove to anyone.